Space for the largest European start-up

Electricity utilities company RWE recently changed its name to Innogy, which also reflects a fundamental change in the way the company has structured its services and is addressing the energy challenges of the future. It is such a major change that its new activities under the new brand have been termed the largest start-up in Europe. The internal transformation was also accompanied by a change in culture and communication – not just logo and visual style, but the work environment should also demonstrate that the brand is serious about innovation and that it is recruiting young creative people who share this new vision.

At Innogy they decided that the best way to forecast the future is to become an active creator of it and strive to show the way forward as a pioneer. Because anyone who wants to change the world should start by looking at themselves, they had to first transform the company culture and its approach to business. Together with these changes the concept was born of a new more creative and lively work environment where new ideas and non-traditional solutions will flourish.

The Czech headquarters of the firm has been located on Limuzská street for over twenty years. When it came to rebranding the company they also started to think about a new headquarters. It was felt that their offices were outdated. Just making cosmetic changes to correspond to the new visual style was not sufficient; a fundamental change was required to enable the company to face new challenges. The managers were faced with a major decision – either move the company to new premises or attempt to renovate the existing building. In the end the decision to remain was taken on the basis of not just economics, but also tradition and the existing facilities.

The changes that took place at Innogy included a complete new method of organising work. Project teams across the company worked on new projects improving processes and work environments. At the start it was therefore clear that the space would need to be conceived in a new way – they had to move away from the traditional concept of office space. The decision was therefore to divide the building into two functional parts – administration/project and creative. 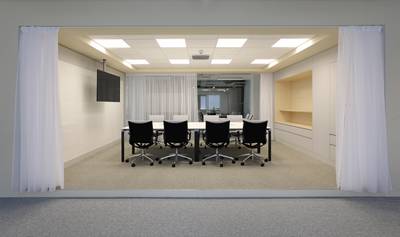 This is where the Innogy business development takes place – new digitisation or the forthcoming entry of the company into the telecommunications market. The entire floor can be divided using sliding partitions into four parts depending on the work of the project teams. Each team can therefore have its own closed area and for a whole year, or longer, they can work undisturbed on their project.

Working with TECHO, architect Michal Matějček from the firm Ateliér Kunc came up with the idea of using suspended panels. It was a good idea that met the client’s requirements, but it presented a major technical challenge. Due to the sizes involved it was necessary to arrive at a design solution that reduced weight as much as possible and also a smooth system for sliding the dividing panels so that anyone can move them into position. 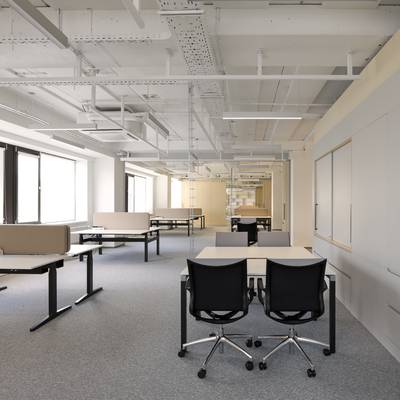 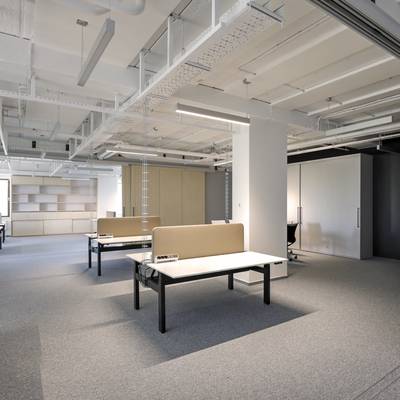 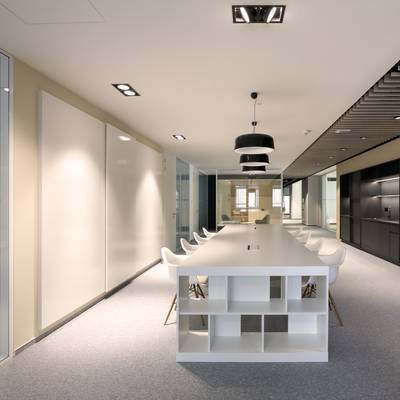 The project floor includes many non-standard solutions, such as the recessed kitchenettes 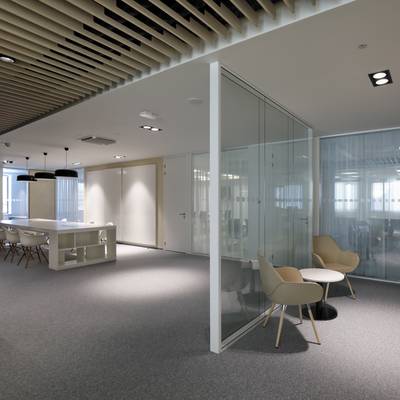 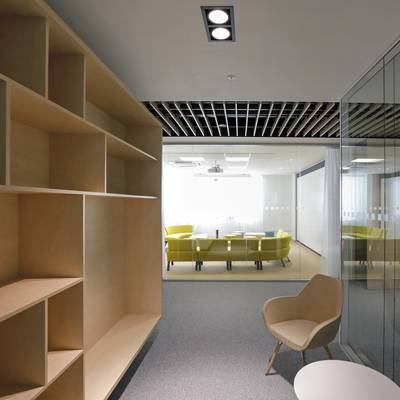 The interior includes many practical elements, such as bespoke storage units

The creative heart of the company. This is where new ideas are generated and new projects initiated. The space as a whole can be closed completely, or it can be divided into smaller units if this is required for the given projects. The entire solution is geared up to this and, in contrast to the project floor, this space is characterised by the lavish use of colours. Here you will find various types of seating to suit events such as workshops or screenings. Employees have come to like this atmosphere so much that they come here even if they have home office, and it is also used by colleagues visiting Prague from other branches who don’t have their own workstation here. A canteen area is also incorporated into the space, which can be used for breakfast meetings or for watching television. 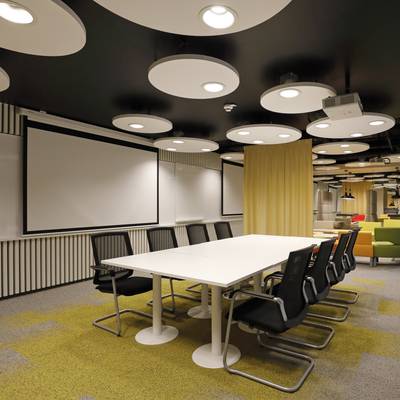 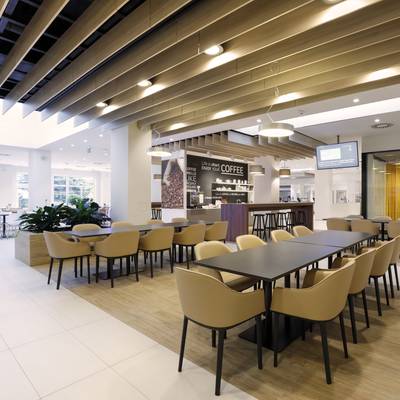 In the canteen employees can also follow sport on TV

People are now closer to each other 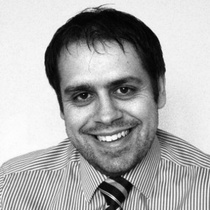 Somewhat exaggerating we say that our financial results are affected more by the weather than by work efficiency. However, the work environment has changed the mood and communication within the firm. The entire canteen zone and the creative space have become the lively and bustling heart of the company where up to 700 people from across the nation can gather for a meeting. There is space here to gather, discuss and eat. We are pleased that our people have quickly learnt to use this area. It is clear to us that the new environment is promoting cooperation and innovation.

Complete project and cost management including site supervision and health and safety: Ediffice